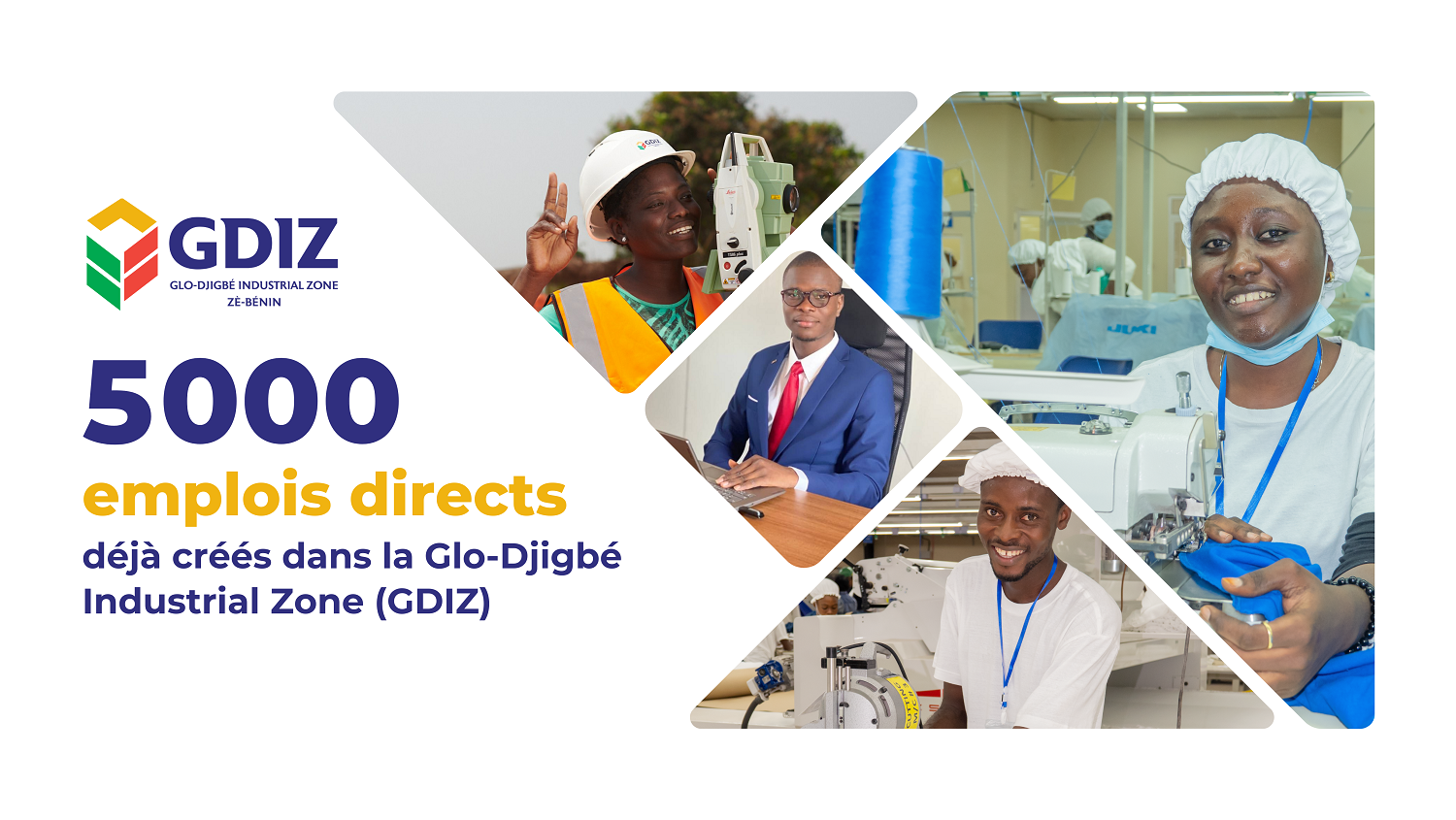 Two years after its creation, and one year after the start of the first construction works, GDIZ becomes a main actor of the job creation for the benefit of the Beninese youth.

In Benin, creating decent jobs in large numbers, especially for youth and women, is a priority. The objective of full employment and decent work, ranked eighth in the Sustainable Development Goals (SDG 8), appears to be an imperative that the Government of President Patrice Talon is addressing in a holistic manner.

Glo-Djigbé Industrial Zone, born from the will of President of Benin to add value to the export products in the Republic of Benin and to promote better opportunities for wealth creation and employment for the population, already counts more than five thousand (5,000) workers. These workers include administrative staff, contractors and site workers. The Zone also generates countless business and indirect employment opportunities.

This figure is a concrete expression of the promise of SIPI-BENIN S.A., a Public-Private Partnership (PPP) between the Republic of Benin and ARISE Integrated Industrial Platforms (IIP), to create jobs for Benin’s youth.

GDIZ contributes to the realization of the PAG II (2021-2026) of the Government of Patrice Talon which intends to generate more than one million three hundred thousand (1,300,000) direct and indirect jobs.

SIPI-BENIN S.A. also invests in the training of young Beninese for the provision of qualified and quality personnel to the industrialists installed within the GDIZ. The operationalization of this vision has resulted in the construction of a Garment Training Center (GTC). The Center is already functional and has more than heigh hundred (800) trainees. They receive quality training from experts from different countries. The first T-shirts, shirts, and polo shirts “Made in Benin” were created during the training sessions thanks to the will, diligence and ingenuity of these very talented young Beninese learners.

In addition to job creation, the GDIZ aims to promote and attract agricultural, industrial, commercial and service investments; to encourage direct investment, both Beninese and foreign; to promote the development of national production and natural resources; to develop the manufacturing industries of primary, secondary and tertiary processing; to increase the competitiveness of products “Made in Benin”.

At GDIZ, we celebrate equality, diversity and are committed to creating a sustainable and inclusive environment for all employees. We work to develop a positive corporate culture that ensures every employee has a safe and rewarding workspace. Achieving this goal would not be possible without the involvement of all stakeholders. We have instructed all investors who have signed contracts to reserve plots of land to settle their factories in the Zone to scrupulously respect law n°98-004 of January 27, 1998, on the Labor Code in the Republic of Benin.

”At GDIZ, we contribute to the promotion of better opportunities for wealth creation and decent jobs for Beninese. We ensure the implementation of quality infrastructure that meets international standards and is essential for the installation of investors. In close collaboration with Benin Government, we have developed a policy aimed at granting foreign direct investors and locals the most competitive customs, fiscal and social facilities and advantages in the sub-region. Our ultimate objective through the development of this Zone is to create real added value through the local transformation of our products and the creation of thousands of jobs for our youth

Cosmetics company SOBECO to set up within GDIZ