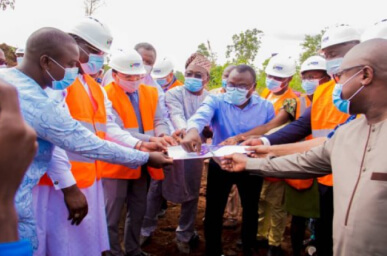 The Government of the Republic of Benin officially handed over the Glo-Djigbé Special Economic Zone site to the technical partner responsible for planning and developing this zone.

This zone with an area of 1640 hectares was created on February 5, 2020 by the Government of the Republic of Benin. This is the culmination of a process that began with the adoption of the law establishing the regime of Special Economic Zones in Republic of Benin in 2017 and the signing of a partnership agreement with the ARISE group in November 2019 for the planning, development and operation of this area.

This site handover ceremony was conducted by the Director General of APIEx, Mr. Laurent Gangbes, in the presence of the Prefect of the Atlantic, Mr. Jean Claude Codjia, the Mayor of Abomey Calavi, Angelo Ahouandjinou, the Mayor of Tori, Rogatien Akouakou, several directors general (DGI, ABE, ANAEPMR, IGN) and technical directors.

The Government’s objective by creating this zone is to make Benin an industrial hub and ensure the processing of agricultural products, in particular cashew, cotton, shea, pineapple, soybeans, etc, and capture the added value of our agricultural products to a much greater extent.

The Special Economic Zone of Glo-Djigbé will be gradually developed in order to optimize capital expenditure and project profitability. This development will be carried out in two phases:

Phase 1: 635 Ha, including 485 Ha of industrial, commercial and storage area, the rest being devoted to infrastructure and common facilities (eg the one-stop shop building);

According to the Director General of APIEx, this Special Economic Zone is designed to be a modern industrial park, respectful of the highest environmental and social standards, and intended to provide services to different industries, in particular:

He adds: “on December 16, 2016, the Government of the Republic of Benin under the leadership of its President, His Excellency Patrice Talon launched the program of actions of the Government of Benin-Revealed (2016-2021), the objective of which is to structurally transform our economy.

The execution of this ambitious program is based on the development of several sectors, including the agricultural sector, and the transformation of our agricultural products.

Today, with this site handover ceremony to our partner ARISE which together with the Republic of Benin through the Company for Investments and Promotion of Industry-SIPI-BENIN will develop, develop and operate this site, we let us irreversibly initiate the process of industrialization of our country.”

300,000 – 350,000 jobs are expected in this area by 2030 (including 100,000 jobs in cashew processing and 200,000 – 250,000 jobs in cotton spinning / weaving and clothing manufacturing), which will undoubtedly change the economic paradigm of Benin, and that of the populations of Glo-Djigbé who will be the first beneficiaries in terms of employment and socio-economic benefits of this project.

The Director General of APIEx praised the ARISE group which has committed itself with Benin to the structural transformation of its economy by agreeing to be the technical partner in the implementation of the project.

Finally, he praised the ambition, visionary and practical spirit of the Head of State Patrice Talon who designed the Glo-Djigbé Special Economic Zone project, identified the best technical partner to assist Benin in its realization. and who today asks with a demand for results to succeed in this project for the economic development of Benin.