Glo-Djigbé, January 25, 2023 – The Société d’Investissement et de la Promotion de l’Indusrie (SIPI-BENIN S.A.), in charge of Glo-Djigbé Industrial Zone development, is proud to announce that it has been awarded on January 13, 2023, three (03) ISO certifications including ISO 9001:2015 (quality management), ISO 14001:2015 (environmental management), and ISO 45001: 2018 (Occupational health and safety management system). The integrated management system certifications had been registered on IAF (International Accreditation Forum) website for the scope of our business as design, development, operation, and maintenance of GDIZ.

By meeting the extensive criteria of ISO standards, SIPI-BENIN S.A. proves its commitment to building a safe Industrial Zone and consistently delivering quality outcomes for investors and employees and respecting the requirements for an Occupational Health and Safety (OHS) management system.

The International Organization for Standardization (ISO) is an organization widely recognized in the world that develops quality management standards to ensure the quality, safety, and efficiency of products, services, and systems.

This enables companies to operate more effectively on several different levels to provide high levels of customer satisfaction and drives continuous improvement. SIPI-BENIN S.A. achieves these ISO certifications, by putting in place good practices in the Industrial Zone of Glo-Djigbé, to contribute to the industrialization of Benin.

SIPI-BENIN S.A. is a joint venture between the Republic of Benin and ARISE IIP which is highly involved in the industrial development of the continent without ignoring the quality approach in its operations. ARISE IIP implements in all its Special Economic Zones, the best managerial strategies in terms of interpersonal relations; monitoring of operations; guarantees of products & services that enable it to boost its managerial and socio-environmental impact.

“Being rewarded with these three (03) certifications is a testament to GDIZ’s dedication to delivering the highest levels of quality services to build the most competitive and sustainable Industrial Zone in Africa and be the catalyst of Benin’s economic development. These certifications reinforce GDIZ’s relentless focus on creating an industrial zone based on our core value of putting sustainability at the heart of everything we do, and constantly aiming to make a positive environmental and social impact.” said Mr. Létondji BEHETON, General Manager of SIPI-Benin S.A. Société d’Investissement et de Promotion de l’Industrie – Bénin (SIPI-Bénin). 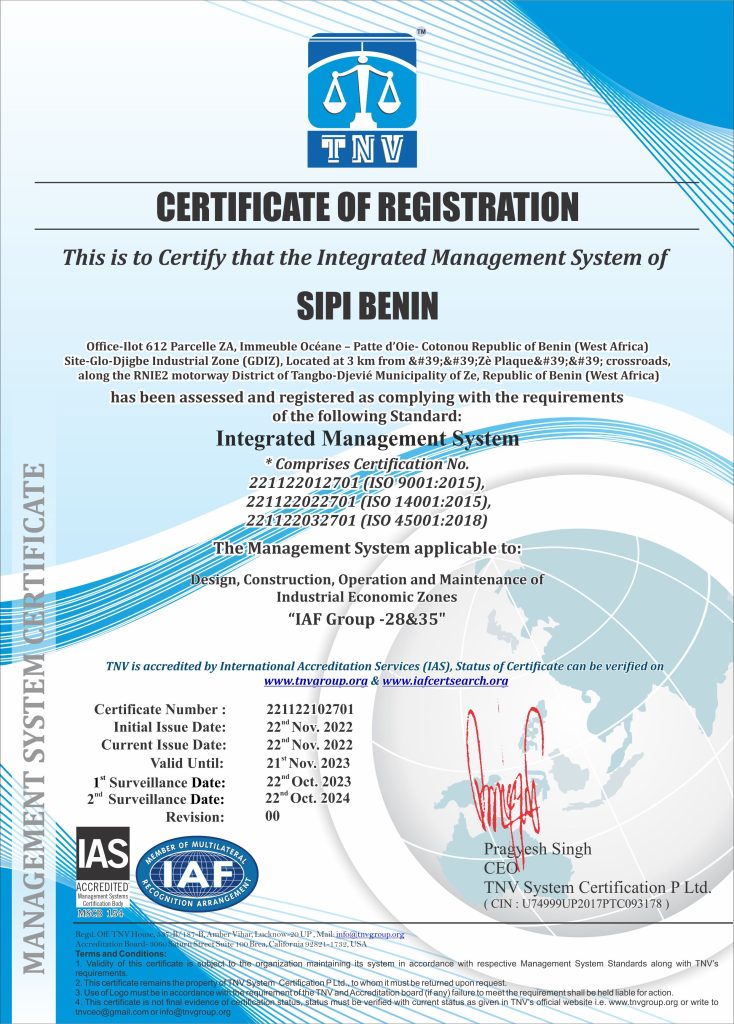 Follow us to not miss out on any job opportunities at GDIZ and subscribe to our various digital channels.