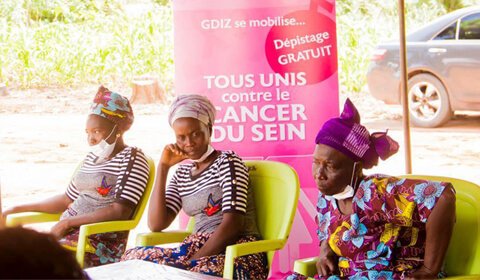 The Glo-Djigbé industrial Zone (GDIZ) organized a campaign aimed at raising awareness among women about breast cancer screening on November 1, 2021. Exchanges between health professionals and women took place in the district of Tangbo Djèvié, municipality of Zè.

The villages of Anavié, Agbodjèdo, Houézè and Adjin Aga were concerned to raise awareness amongst the population on breast cancer disease. The health professionals namely: Doctor Tchimon Vodouhè, gynecologist-obstetrician, Doctor Solange Houédjissin, gynecologist-obstetrician, Stéphanie Ogoutchina, senior nursing technician and Mireille Houngnon, head of the delivery room of the hospital of zone d ‘Allada, spoke to participants about the importance of early detection and regular medical monitoring, especially from a certain age. They encouraged women aged between 50 and 74 years to be screened by a mammogram atleast once every 2 years and a palpation every year from the age of 25 years, by a palpation by a health professional, once a year and throughout life by gynecological follow-up with palpation once a year. Women were also encouraged to perform regular self-examination, in order to observe any changes that should be brought to the attention of physicians.

Why is breast cancer deadly?

According to speakers, breast cancer is the deadliest in women. This is a disease when discovered early enough, can be cured permanently. This, therefore justifies the organization of the sensitization session which will be followed by screening with a view to detecting possible cases of disease at a sufficiently early stage, with a view to a simple and less expensive treatment. “Our goal is to ensure that more and more women are informed about the disease, that they are informed about what leads to the disease, that they are informed about the warning signs of the disease and that they have the reflex to come easily for a consultation when something worries them about their condition,” they said. According to their explanations, the discovery of the disease at an advanced stage requires a heavy treatment which is not available in Benin. However, they say, early diagnosis calls for cheaper treatment and increases the patient’s chances of survival.

The awareness campaign continued for a week and will also be followed by a screening session.