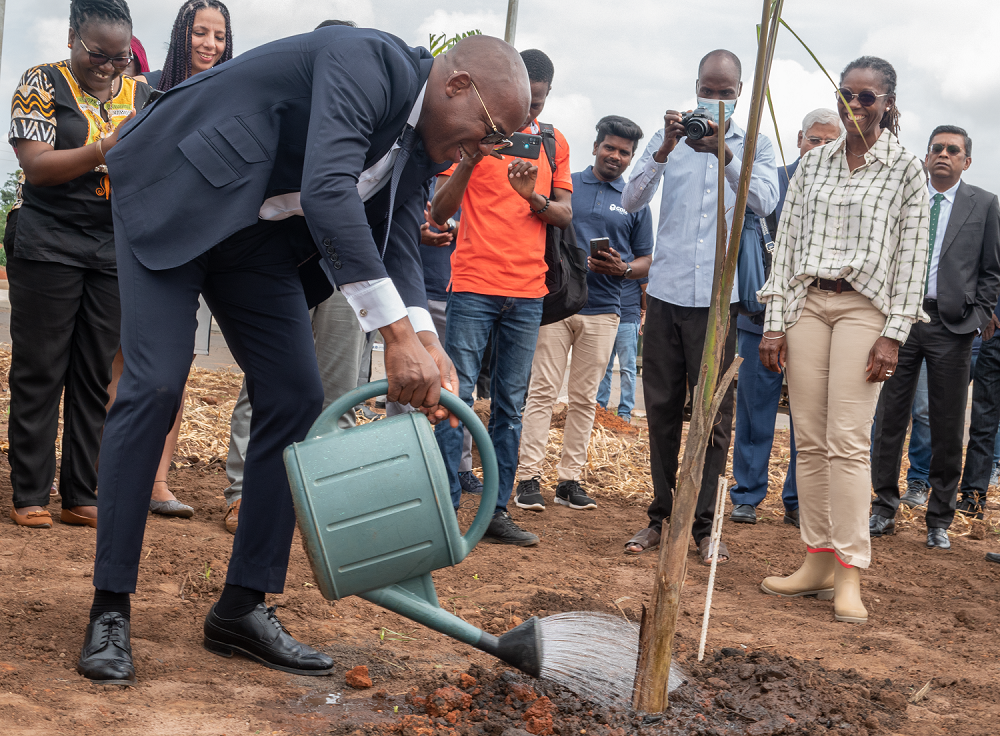 This Wednesday, June 1, 2022, marks the 38th Edition of the National Tree Day. Instituted in Benin since 1985 by Decree N°85-291 of 2nd of July 1985, this event was originally initiated in 1872 by Julius Sterling Morton, Secretary of Agriculture of the United States.

Glo-Djigbé Industrial Zone (GDIZ) wanted to mark this date by organizing a planting ceremony of a hundred tree seedlings.

Indeed, in a context of global mobilization in favor of the preservation of biodiversity and the fight against climate change, the tree is a major actor for our quality of life.

Aware of the stakes and benefits that these plants represent, the Société d’Investissement et de Promotion de l’Industrie (SIPI-BENIN SA) has placed the protection of the environment at the heart of its industrialization strategy in Benin. Approximately 1,500 trees will be planted within GDIZ. To date, SIPI-BENIN has already planted about five hundred (500) trees and another thousand will be planted gradually.

This ceremony of planting about a hundred plants at the level of the central earth-fulls, took place in the presence of the Director General of SIPI-BENIN SA, Mr. Létondji BEHETON, accompanied by the Director General of the Agency for the Promotion of Investments and Exports Mr. Laurent GANGBES, the Mayor of the Municipality of Zè Mr. Moussa AMADE, the Mayor of the Municipality of TORI-BOSSITO, Mr. Rogatien AKOUAKOU, the Head of the District of Tangbo-Djevié, Mr. Didier ANAGONOU and several officials from SIPI-BENIN and APIEx .

For this 38th edition, SIPI-BENIN has selected one species to put in the ground: the Roystonea regia (royal palm). Apart from this species, several others will be planted on the corridors within the GDIZ, namely: Mangifera indica (mango tree), Citrus sinensis (orange tree), Khaya Senegalensis (cailcederat) and Terminalia.

“Building a modern, world-class, environmentally friendly industrial zone is our daily struggle. SIPI-BENIN is committed to implement all necessary means for a sustainable development of the GDIZ through the preservation of natural resources, the conservation of biodiversity, the optimization of waste management and the valorization of green zones.” said Mr. Létondji BEHETON, Director General of SIPI-BENIN SA.